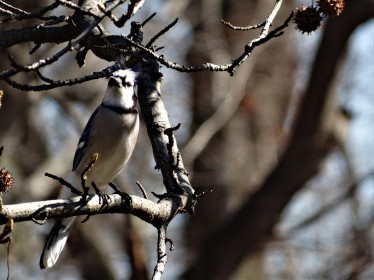 Whether you live in a secluded cabin or in a metropolitan area I’m sure at one point in time you’ve experienced the aggravation of loud neighbors. Now I’m not talking about the average loud neighbor of the human kind but a special kind of acquaintance. Easily distinguished by their blue, black, grey and white uniforms along with their intense and jeering cackles, this rambunctious group of mimicking tricksters is formally known as the common Blue jay. Now although we are Canada’s neighbor I’m not referring to the Toronto Blue Jays. I’m specifically talking about our feathered friend in the Corvidae family.

Blue Jays, Cyanocitta cristata, come from the highly intelligent Corvid family which consists of crows, ravens, rooks, jackdaws, magpies (specifically cyanopica, pica, cissa, and urocissa), treepies, choughs, and nutcrackers. There are about 120 species of corvids worldwide all which have evolved from a single Australasia ancestor. Within the jays, there are 42 species that inhabit various continents and many of them express a variety of blues in their plumage. There are a few beautiful neo-tropical species that exhibit greens as well as purples and there are also a few that lack the vibrant cyan colors, displaying simple greys, browns, black, and white.  Although in comparison to their colorful counterparts the more subtle colored birds are still as handsome in variation.

So what’s so special about these noisy neighbors? Part of the blue jays loud reputation stems from their fascinating ability to communicate with each other. A less obvious but historically important fact is that blue jays played a large role in the rapid population growth of a special eastern North American tree, the Oak (Quercus). In a nut shell (pun intended), you can consider blue jays as the accidental arborist.  Of course they also distributed other species of trees and plants but it was the oak tree in which their long-distance seed dispersal habits resulted in denser oak tree populations  around North America. So how was this possible? Well blue jays are intelligent enough to plan for the winter and as a result spend a lot of time caching food, in other words, stockpiling and preparing for hard times. Nuts are stored in a number of places such as, directly in the ground and covered with leaves or at the base of rotting trees and even between large stones.  Another key example of their intelligence is having the ability to remember their cache locations which can be at a 100 different areas. In 1981 a study conducted by Susan Darley-Hill, and W. Carter Johnson documented the significant amount of acorns that blue jays were responsible for dispersing.  During their research they tracked groups of blue jays as well as individuals with radio transmitters. The results were astonishing… they recorded that the jays were storing around 4,000 acorns each, in one season!

Although most seeds are retrieved because they have great memories, there are some acorns that are left behind.  Naturally this leads to germination and eventually another tree. You may think that all the back and forth, one acorn at a time, can be a  fruitless task but jays have a special secret to making the most of their travels. Although they don’t have pockets blue jays have the ability to carry nuts in their crops (an expandable esophagus pouch), allowing them to transport multiple acorns at once (depending on the acorn size). In regards to their gardening skills, interestingly enough, during their researcher Susan Darley-Hill and W. Carter Johnson documented blue jays carrying nuts about 2.5 miles away from the parent tree.  Seems like a hassle and you may wonder why would they bother to cache so far away? Well believe it or not it’s to be as inconspicuous as possible. Birds can be ruthless and they do watch each other’s daily movements for the purpose of raiding food sources. With the possibility of their food storage being stolen caching birds such as jays have to watch their backs and update their hiding spots frequently.  In my opinion, caching seems like combination of games such as hide and seek, memory, along with a twist of highway robbery!

Nevertheless the blue jays wit usually gets the better of them all. While applying their arborist skills and helping other species flourish, our noisy neighbors are thriving in urban environments as well as rural ones.   So the next time you see an oak tree growing out of a random location just think, it may have been planted by the accidental gardener, your rowdy neighbor…the blue jay.